With China’s changing economic situation and the influx of wealth that has hit the country like a bomb in the last thirty years has come a steadily building superiority complex.

With Monday’s departure for Vietnam looming ahead , various people have asked me about my plans for the Communist party’s week-long bash. My answer like usual is to get out of China. The sheer brilliance of giving almost everyone in the nation’s most populous country time off equals an insane migration of people and massive crowds. However , when I tell them where I’m going , they seem to be less than impressed. Keep in mind that these people aren’t China’s wealthy. They make around a little less than $500 USD a month.

My Co-workers.
Me – I’m going to Vietnam!
C (Co-workers) Vietnam? It’s too dirty!
IMH ( In my head) And China isn’t dirty? The newly found wealth in the country is pretty much the direct result of the sacrifice of the environment.

GFB – You’re going to Vietnam? Vietnam doesn’t have any fun places!
Me- Hanoi’s eclectic old french quarter , Halong Bay , hiking in Sapa , beautiful remote beaches , the upcoming Phu Quoc island resort center.
GFB – China has beaches too! Go to Sanya ( on China’s tropical Hainan island)
Me- What ? With the 5,000,000 rich people who descend on the island every year? With the full hotels and the quadrupled prices? Anyways, I enjoy the experience of going to a different country with different languages , architecture , and culture.
GFB – CHINA! 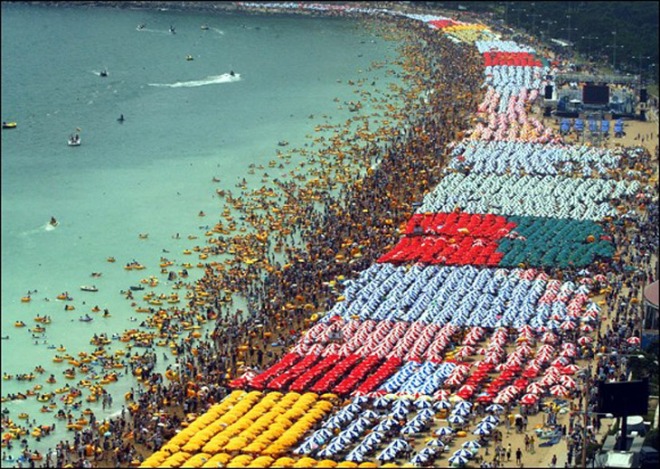 While my co-workers are nice to me for the most part , my girlfriend works in an extremely competitive office and she is on the low ranking side of things. These people are mean to her.

GF- I’m going to Vietnam!
GFC – HAHAHAHA , POOR YOU! YOU CAN ONLY AFFORD TO STAY IN POOR ASIA. TALK TO ME WHEN YOU GO TO EUROPE.
GF (Angry but trying not to show it) – Well ,where are you going?
GFC – Staying in Shanghai .

Now China , it’s best to remember that you have more peasants than the entire population of Europe. Just because there is an (admittedly) strong elite with vast amounts of wealth , and you have a huge military doesn’t make you number 1.Living in a relatively expensive city like Shanghai with a relatively low wage doesn’t make you superior to the Vietnamese who have a low wage but live in relatively cheap Hanoi.

Let’s quit with the superiority and enjoy the holiday! 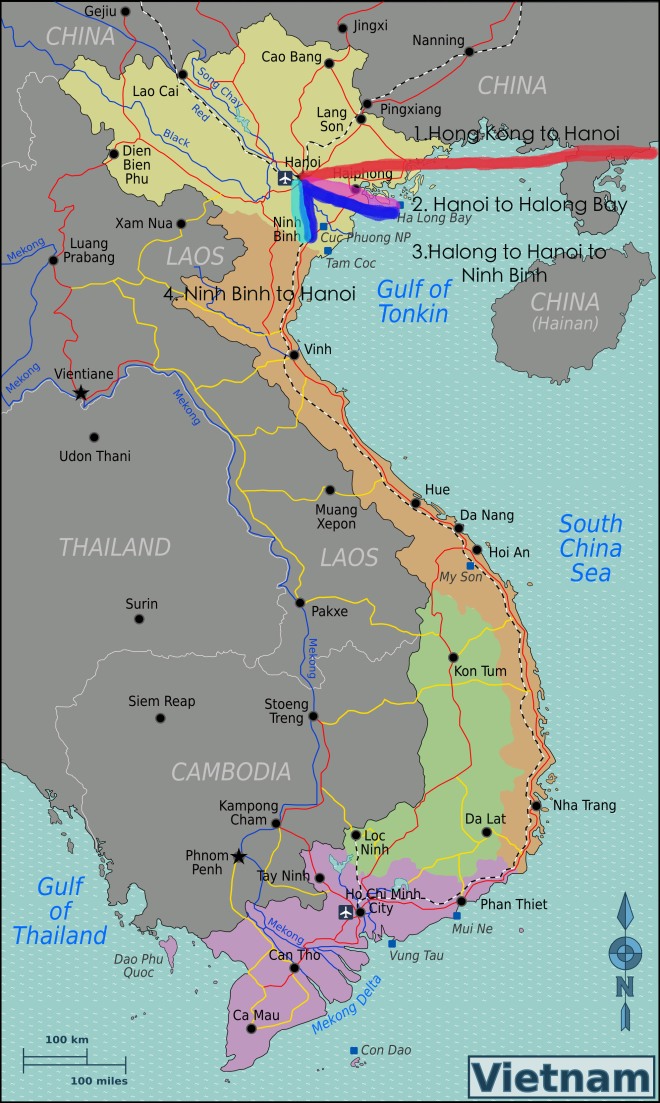 With my tickets booked for Vietnam , I’m getting ready to go! Ideally I would spend a good year or two there but unfortunately it seems like things don’t work that way , and I’m left with a mere week. *Sigh*

Waiting too long to buy tickets and getting shell-shocked at ticket prices has left with me with pretty crap tickets. I would love to fly straight in and waste no time but am left with two overnight stays in Hong Kong. I haven’t been to HK so this is actually awesome. Otherwise I would be groaning about the waste of time. However, I also have tickets in November to HK to see my uncle and cousin. Ah well, this is how life works. It’s still good because my girlfriend gets to stop in Hong Kong as well. Chinese get a few days access to Hong Kong visa free if they have an onward ticket.

So here is the plan:

October 1st : Leave Shanghai at 7:00pm and fly to Hong Kong.
October 2nd : See as much of Hong Kong as we can. See the famous skyline and take a trip up to Victoria Peak , leave Hong Kong at 5:40pm and arrive in Hanoi 7:40pm.
October 3rd : Explore Hanoi.
October 4th : Leaving early morning to Halong Bay.
October 5th : Early morning leave for Hanoi and take the soonest bus possible for the non-touristy rural town of Ninh Binh.
October 6th : River rides and temple exploring in Ninh Binh.
October 7th : 2 hour bus ride back to Hanoi, do more things in the city , leave at 7pm on a flight to Hong Kong. Sleep in the ghetto ChungKing Mansions.
October 8th : Noon departure for Shanghai , get in around 2:45 pm and chill the rest of the requested off and pay-free day.
October 9th : 7:20 am wake up and back to reality.

Things we are really looking forward to :

Halong Bay – Breathtaking karst mountains rising out of the sea , kayaking trip , cave exploration , and spending the night on a boat in the middle of the bay.

Next time around I’ll have to make a trip to the South and see the beautiful beaches , Ho Chi Minh city, and maybe try to work my up the coast. (Vietnam stretches quite the distance south to north , no?)

I’ve been stuck in the country since February’s Cambodia trip ,and my poor blue backpack is moaning from the closet , various Lonely Planet guidebooks are constantly rattling the bookshelves, and I’ve got an intense itch in my soul (maybe I should get that checked out?) . I need to get out on the road. Sure there are lots of places within China that I need to see still but the genius of giving everyone in the most populous nation of Earth time off at the same time is pure chaos. Forget trying to travel in China. I can see lines and experience a crowd jostling for position almost anytime I like. The only problem with trying to get out of China is the airlines are wise , and prices skyrocket accordingly.

It’s also a bit harder for me to travel now since I can’t leave the Chinese girlfriend back in the mainland. For those of us with coveted American , fancy European Union, and ASEAN passports , we can easily forget how hard it is for nationals of less prosperous countries to get around.

Our original intentions were for a week-long trip to Taiwan , starting from Taipei and working our way south to visit my American friend doing the whole TEFL thing in Tainan. China considers Taiwan a part of it , right? Should be easy for Chinese to visit , right? Get ready for it …… WRONG!

First up we would have to visit the city of Nanjing where my girlfriend’s household registration permit is stored at her university. The university is closed on the weekends so this entails taking Friday off. The household registration permit must be taken to the Entry Exit Administration to receive a travel to Taiwan permit. This is no big deal , a bit of a hassle but easily done. However, then an Taiwan entry permit must be applied for with a tour group. If you go with a tour group this isn’t so hard but will still cost nearly $200 USD. Now I’m not a fan of tour groups and I despise Chinese tour groups. I do not want to crowd in a bus with a bunch of spitting , smoking , loud middle-aged people , herded off the bus , and given 2 minutes to snap some photos before being forced back onto the bus to go “see” another site. I want to travel at my own pace , do my own things , make my own itinerary , and see my friends.

Tour companies can, however, get a permit for a solo Chinese traveler to visit Taiwan. With fingers crossed we began the process of trying to find out some information. Some tour agencies in Shanghai turned us down saying since my girlfriend’s household registration is in Nanjing we would have to use a Nanjing based company. Hmm , ok. Calling Nanjing tour companies left us devastated as we would have to prove my girlfriend makes 120,000 rmb / year ( nowhere close) , showing proof of household ownership (hah!) , and/or having 50,000 rmb in a bank account that will be frozen until her return to the mainland (no way).

We put Taiwan plans out of our minds. Impossible. Now the mad scramble to find a destination began.

Guess what the problem is?

Uh-oh developed wealthy country makes it tough for her to get a visa. It seemed actually possible (unlike Taiwan) but we weren’t guaranteed the visa. We needed to buy a ticket somewhere now or else we weren’t going anywhere.

Whoa awesome deal (compared to other places during October 1st Holiday) popping up on Orbitz , $559 to Bangkok! Let’s do it!

Screen flashes back ” Sorry due increased demand at this time these seats are not currently available.” “This current flight is now $800”.

We tried place after place , combination after combination of different departure times , and finally settled on a $600 flight to Hanoi, Vietnam. I wait too long every single Chinese holiday and each time have chosen my destination based on the least expensive ticket. In order for this to be the least expensive ticket , it’s usually the most inconvenient , sometimes downright awful , combinations of flight times. For example , we arrive in Hong Kong at my 9:40 pm on the 1st and make the connecting flight to Vietnam at 4:00 pm on the 2nd. Giving us an 18 hour lay-over in Hong Kong. This isn’t so bad as it gives us a chance to see HK a little bit (both have never been) but staying the night in Hong Kong adds up. Hostel beds are like $20-30 a piece at the cheap , tiny , not so nice places in ChungKing Mansions. A place noted for having drug dealers , prostitutes , being the base of shady things for Hong Kong , and if that isn’t bad enough is also a deathtrap if case of fire. Score! On the way back from Vietnam we will make another stop over in HK from 1 am-ish the night of October 8th until 12 noon. Enough time to make it to ChungKing Mansions , sleep , and make it back to the airport to undergo security checks and board our flight.

But you know what? I don’t care. I’m going to Vietnam in a month and a half! Wooo hooo!

We don’t have our visas yet but they are easily obtainable from the Vietnamese Consulate in Shanghai , take 4 days to process , and hit the wallet a bit hard at 400rmb a pop.

Looks like it’s time for me to tighten the belt up a few notches , quit buying pricey imported beers , and eat vegetable soup for a while to afford this trip. ( Good thing DVDs are so cheap here)

Bring it on ‘Nam!

Eating Her Way Around The World

there is beauty all around us

News and Feature Articles About China

News fresh from the source 時令中國

a site for information about the U.S.